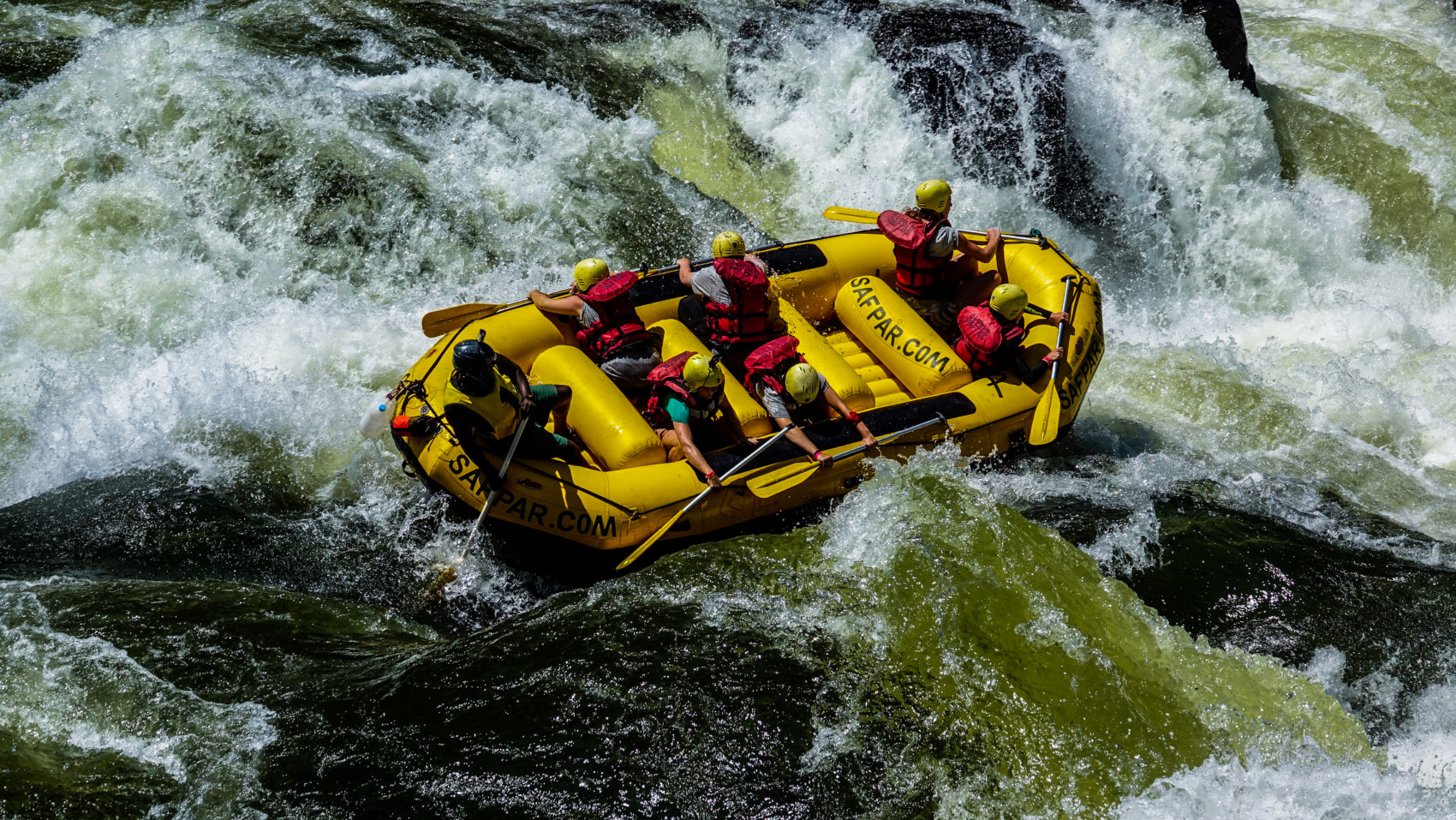 Safari Par Excellence held their annual whitewater festival from 25th – 27th of October and I was lucky enough to attend. The weekend festivities started off with Registration where all the contestants were given their merchandise and participant wristbands and we were ready to go.

The Festival kicked off with a Zambezi cruise on Thursday where rafters and paddlers were briefed, and got to know each other and their skippers as they sailed into the sunset with ice-cold gin and tonics in their paws, and grins on their faces. 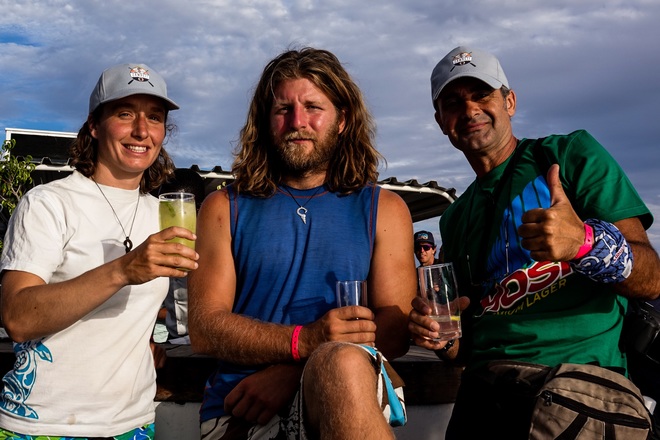 Little can beat a cold sundowner on the MV Makumbi

The Zambezi put on its best show with hippos dancing in the water, crocodiles surfacing to see what all the fuss was about and elephants sharing a drink with us on the river’s edge.

Back at the Victoria Falls Waterfront, we were welcomed by groovy tracks performed by the local and talented DJ, Claudous Hunt, and it was impossible not to shake one’s hips on the dance floor.

Friday: Practice Day. We were greeted by the smell of bacon and egg rolls and coffee wafting through the early morning air, and the sight of the placid Zambezi as it drifted slowly past above Vic Falls, the calm before the storm. While fueling excited stomachs, the eight international teams listened to a hilarious, but informative safety briefing and gear check. We all hopped onto the safari vehicles and headed for the Boiling Pot at the base of Victoria Falls.

Soon the teams were set and in their rafts, adrenalin pumping, ready to rumble, all still taking in the idyllic, breathtaking view. 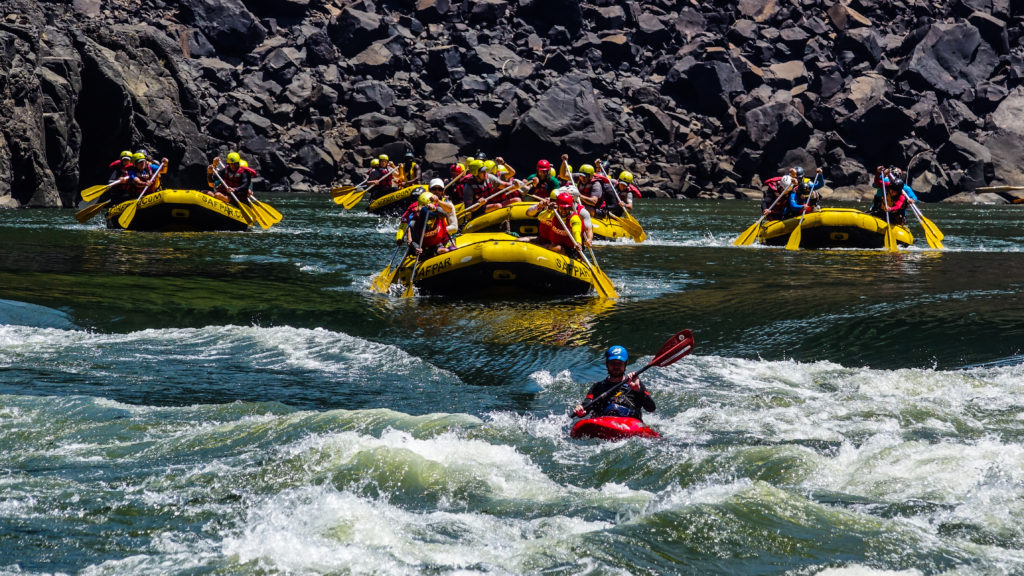 Practice Day gave everyone the chance to get a feel for the river – the Zambezi is like no other river in Africa, a beast one needs to respect and understand, it has great power and is full of life. Every rafter had been gifted a hand-crafted image of Nyami-Nyami, the Zambezi river god, fastened securely around their necks to protect them. Then off we went. 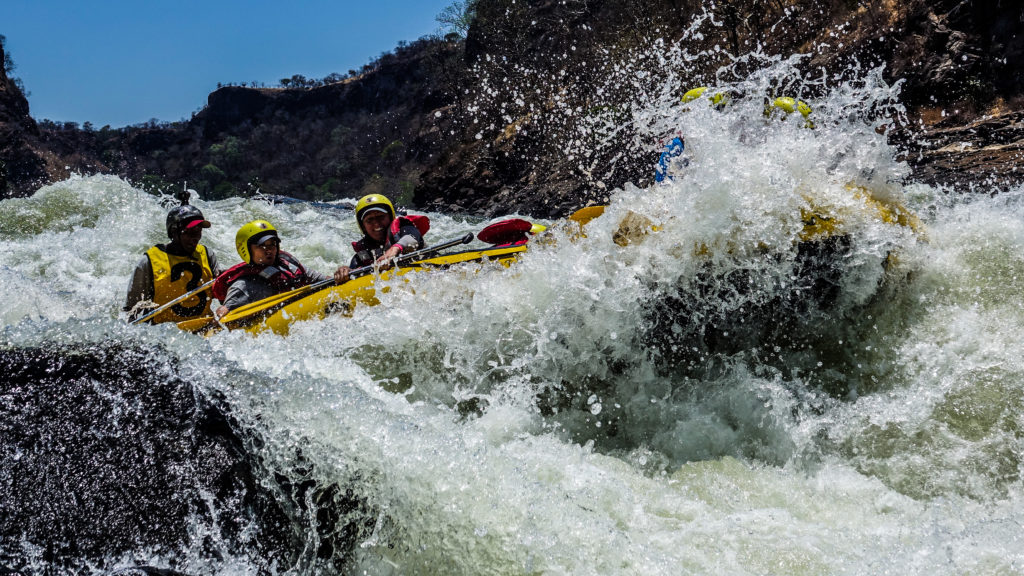 That day there were some epic flips, a few crocodile sightings and a delicious lunch at Rapid 10, the lunch spot with the best view I’ve ever seen – by far. 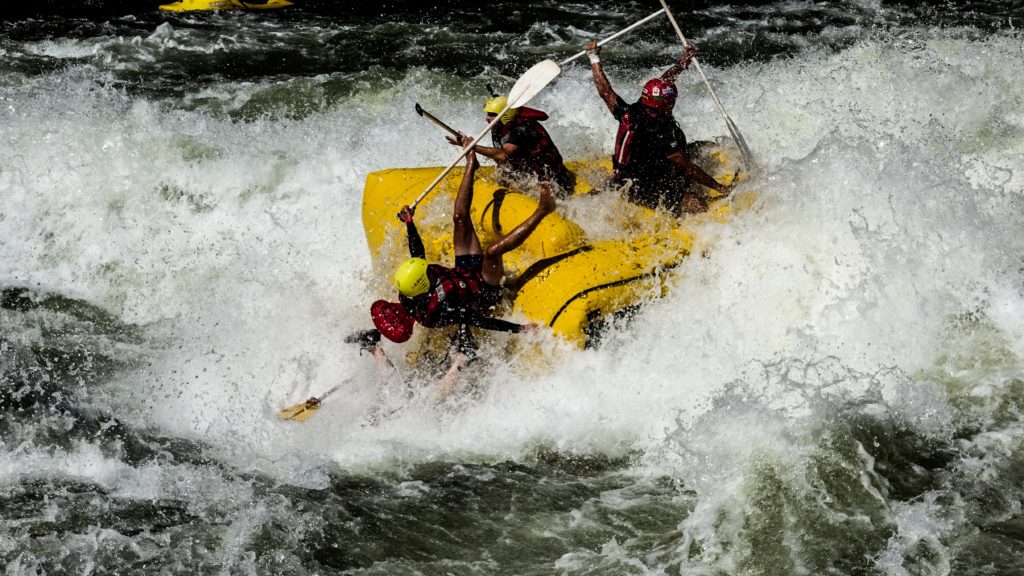 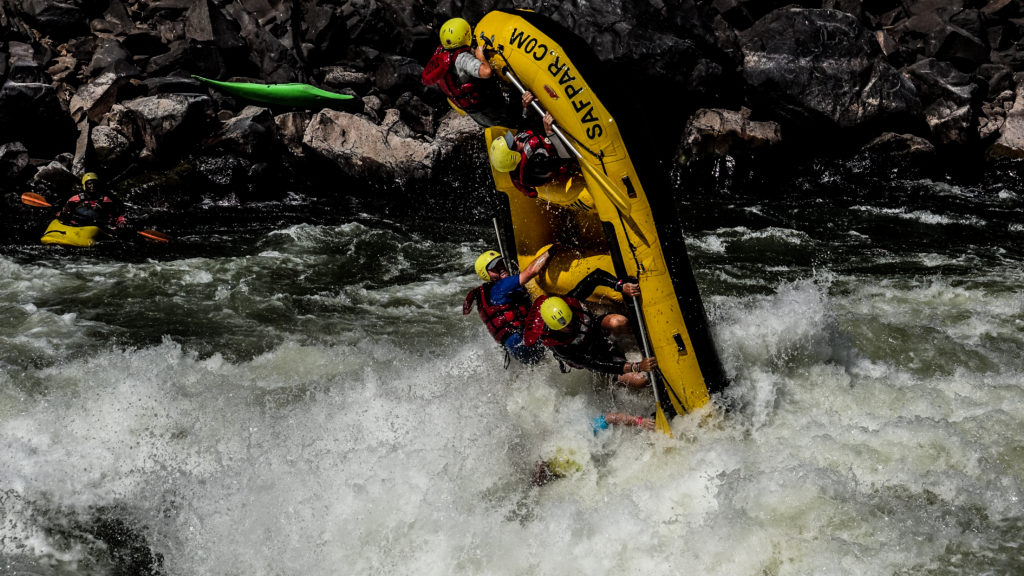 Surf and turf challenge on rapid 18, aka ‘Oblivion’

There were some total wipe-outs and plenty of complete styling at Rapid 18, aka “Oblivion”, where we were shown Superman jumps from rafts, wave surfing and carnage as boats were flipped and happy rafters went swimming, all getting a taste of what was to come on Race Day. Everyone had their first taste of the hike out of the Batoka Gorge, which is a whole other mighty beast. Some left in style on a helicopter charter and others slowly trekked up the gorge, following the ways of our big friendly giants, the elephants, slow and steady while getting the opportunity to witness a view very few are privileged to ever set eyes on. 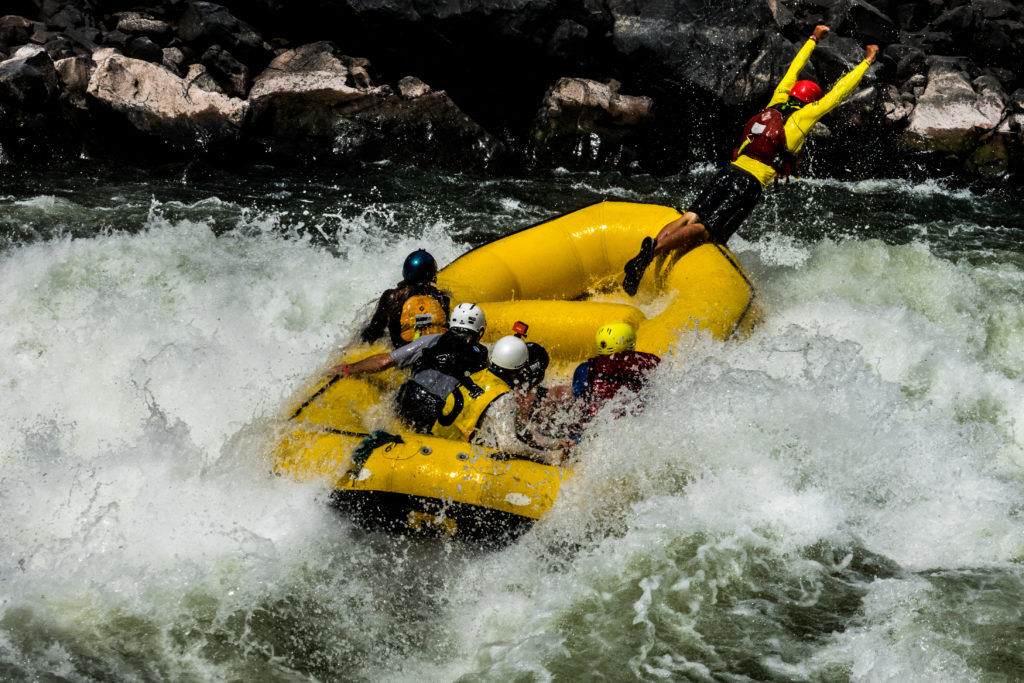 Superman on rapid 18, aka ‘Oblivion’ 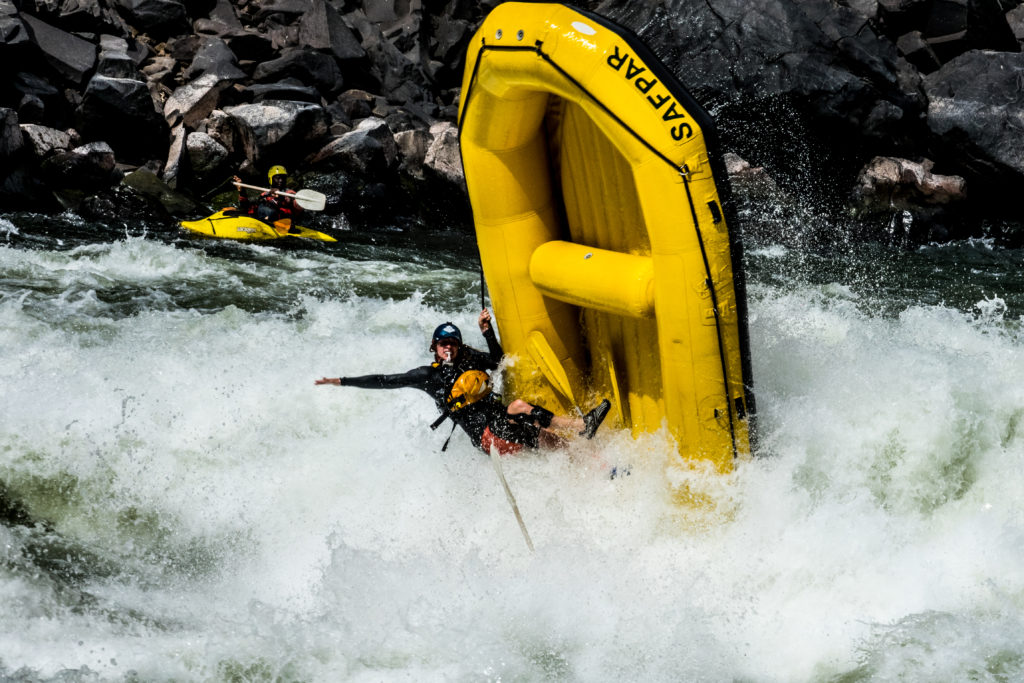 October 27, 2018: Race Day… Up bright and early, excited chatter as the rafters headed for the Falls. What a day it was, not only for the contestants but also for the local and international guests back at the lodge. At the Victoria Falls Waterfront, there was a diverse craft and food market where local entrepreneurs from far and wide came to join the day’s festivities, as well as a kids’ zone. Local artisanal products were on full display, like those from Wayawaya.
Wayawaya “empowers Zambian women without formal education and with few job options,” the organisation says. “Most women live in poverty and being unemployed is a luxury they cannot afford. However, Zambian women are unquestionably resourceful, talented, strong-willed and hard-working. To invest in women is to invest in their children, their fellow sisters, their neighbours and their communities. ‘By women, for women’ is a concept inspired by the fellowship between Zambian mothers and sisters. Together, we carry out vocational training, artisan programs and form viable employment,” Wayawaya says. 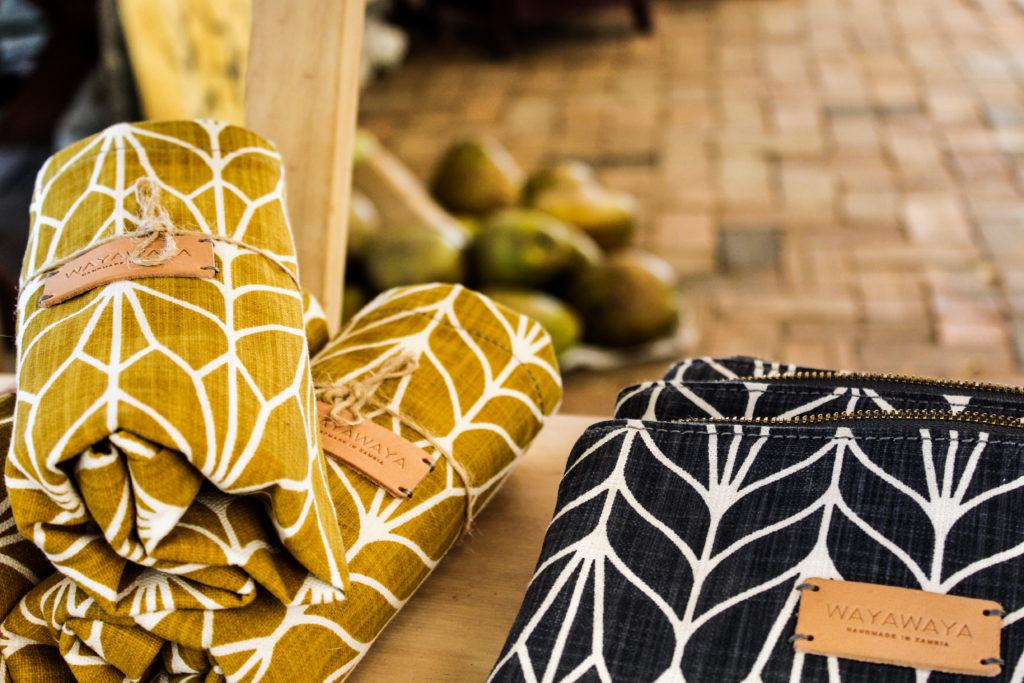 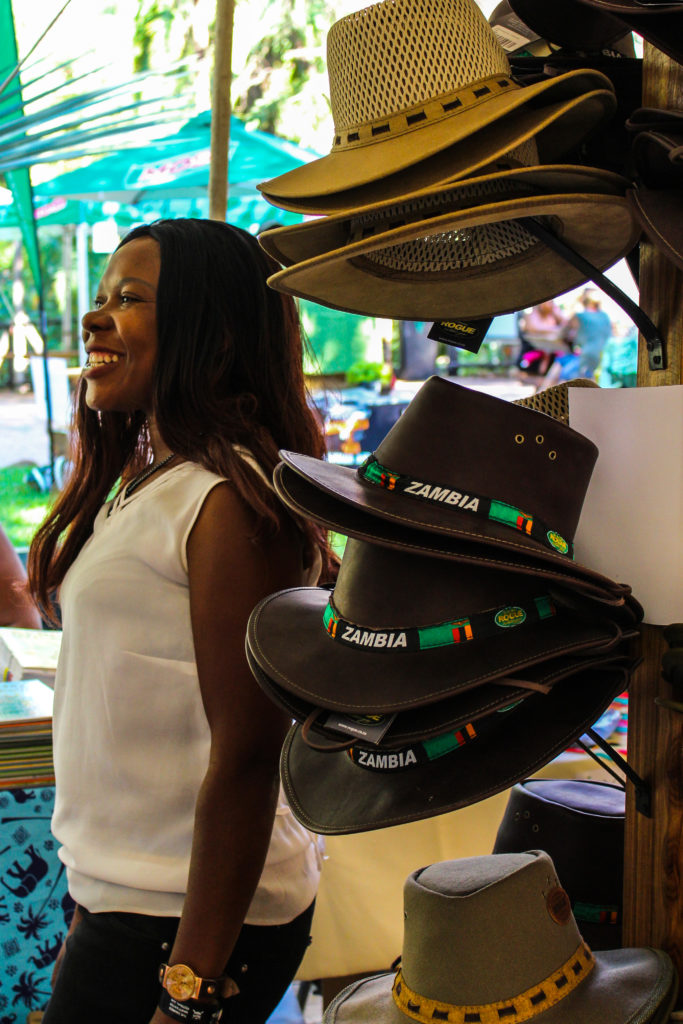 Hats for Africa at the market

Other NGO stalls sold beautiful bags and kids’ toys, beads made from recycled glass bottles, and a mouth-watering smorgasbord of food, including from De Canton – Livingstone’s famous ice-cream shop.

As the day continued, guests gathered to hear Zambia’s iconic Jay Rox perform a taster set, setting the tone for the music to follow that evening. As the sun started to set, the one and only Black Mamba Man headed on stage to give the guests a performance they wouldn’t forget. Alistair Burton, aka Black Mamba Man, is a Zimbabwean musician who performs iconic cover songs as well as his own comical and satirical original pieces, which are brilliantly witty and hilarious.

His performance was followed by the eagerly anticipated prize-giving. Here a video of the competition highlights was shown, there was the raffle reveal, and finally the prize-giving. Cape Town’s Team Gravity were the winners of The Zambezi Whitewater Festival 2018, the team members won helicopter flips over the Falls, courtesy of Batoka Sky. 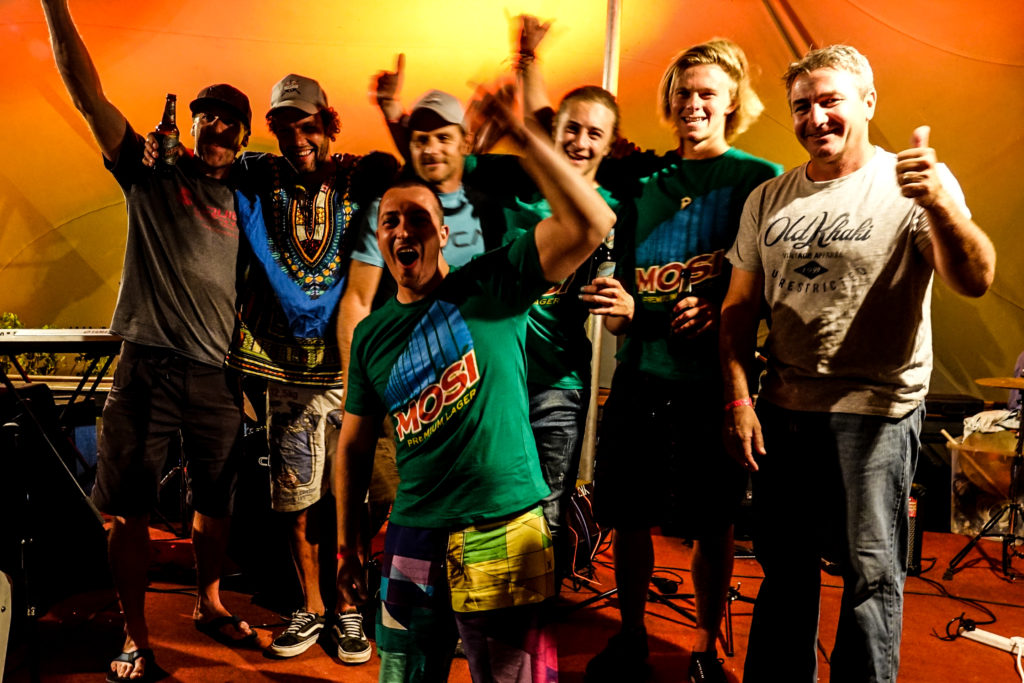 The party rocked on into the early hours of the morning. Everyone celebrated to the sound of live music performed by Harare rock band, Evicted, who ended their gig with a Nirvana cover which sent the crowd into a complete state of frenzy. The closing act for the night was Jay Rox, and his unforgettable performance made the 2018 festival one for the books. 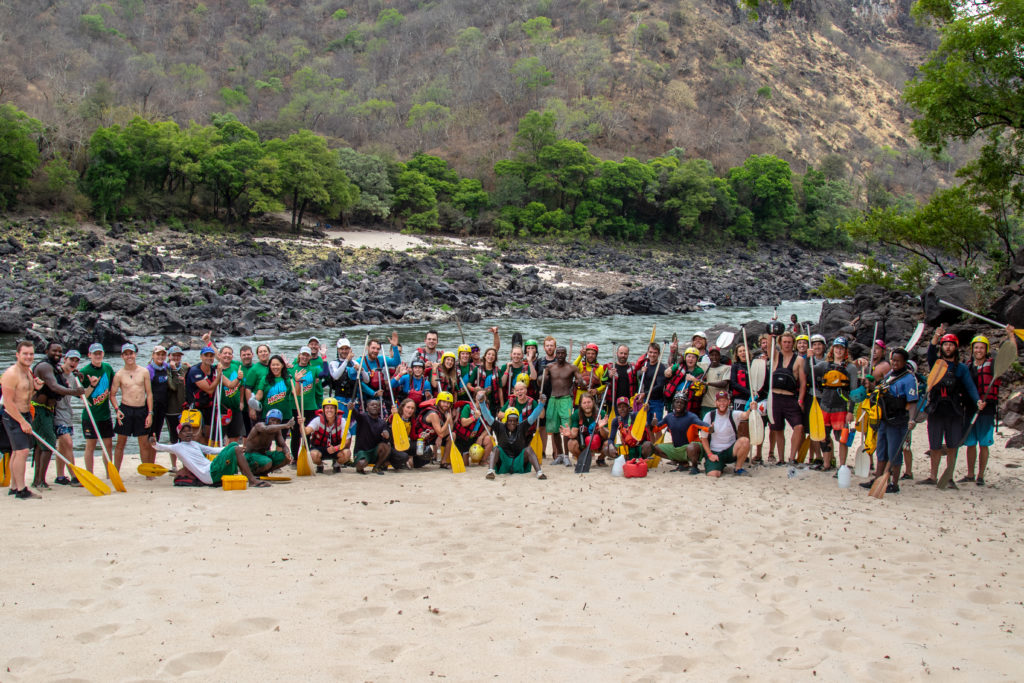 What an epic weekend it was! Although the competition is an international one and of a very high standard, it is by no means exclusive to professional rafters and kayakers – I can confirm that. As a complete amateur, I enjoyed every minute on the river and felt fully included. This festival is one I will be telling my friends and family about for years to come.

If you weren’t there this year, add it to your bucket list now – it is a once in a lifetime adventure and experience!

Until next time, mighty Zambezi: Mosi Oa Tunya will thunder in my heart forever. 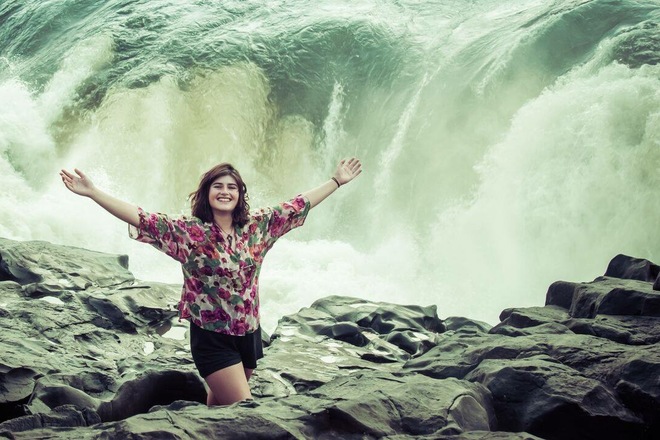